Known as “China’s Hottest Grandpa” and “Old Fresh meat,” Wang Deshun,  is tall, muscular, and well 80 years old but a famous fashion model who ramped during a China Fashion Week in 2015 – bare-chested!

Wang Deshun admitted that it was his first time to walk a runway with his long white beard that turned heads on! After that fashion walk, he became an internet sensational.

Hu Sheguang, a top fashion designers in China, never imagined a grandfather when he planned his catwalk for China Fashion Week in 2015. His plans changed when he saw a picture of Wang in QQ Wang’s smart phone owned by his musician who was composing his soundtracks for the fashion show.

Hu asked Wang who was the energetic man in his mobile phone and the next thing that happened was that Wang Deshun was introduced to Hu. The rest is history.

Wang Deshun came from Shenyang, northeastern Chinese city, in 1936. He worked in pantomime and went into martial arts movies. He appeared in several Hollywood films such as “The Forbidden Kingdom.”

He started going to gym at 50 to keep his body in shape for his acting jobs. After 7 years, Wang developed a muscled body. He did a performance dubbed as “Living Sculpture.” He learned to ride a horse within a month for a movie role. He was 65. And at 78, he learned to ride a motorbike.

He said, “Every day, for 30 years now, I have never stopped training,” and in fact he never misses his arduous swimming regime everyday. “As long as you dare to do things you have never done before, your heart is still young,” he added. 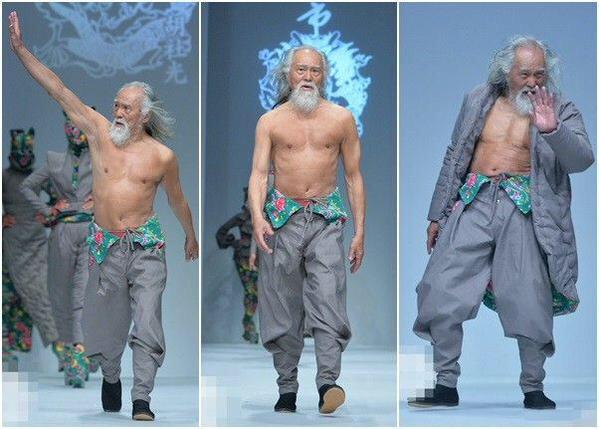 Heads up! He will walk on one of the railways during Milan Fashion Week 2017.